Official mail in Botswana is usually sent in envelopes with an imprint indicating that the item is being sent “On Botswana Government Service” or “On Botswana Postal Service”.  The envelopes need to have a handstamp on them that indicates information about the organization sending them and containing the words “Official Free” (see my webpages on Botswana Official Free Marks for more information on these handstamps).

The On Botswana Government Service envelopes did not require security printing and were therefore produced by many suppliers without a common standard. This has resulted in a very wide variety of covers creating a challenging environment in which to create an easily usable typology.

The typology that I have developed for these envelopes is described in a series of articles that I have published in Forerunners, the Journal of the Philatelic society of Greater Southern Africa.

Errata to previous article “Botswana Government Printed Envelopes”, Forerunners #89: The reference to Figure 10 in the second last paragraph on page should be to Figure 11. 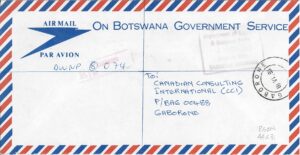