While Port Hood was opened as a way office in 1829, it did not receive its first cancelling device until 1841 when it was upgraded to a full post office. Since that time, it has had almost 50 postmarks of many different types which are illustrated in the following table that has been collated from 15 sources.

The exhibit was shown at Novapex 2010 in Halifax, where it was awarded a Regional Gold Medal.

Since that time, the exhibit has been upgraded with the addition of a 1841 Double Broken Circle Paid Mark struck in red, two extremely rare Numeral Rate Marks from the mid-1800’s, and the modern Postage Label marks. This version was shown at Novapex in 2012 where it won a National Vermeil.  A copy of this exhibit can be found here: 2012 version of the Port Hood Postmarks Exhibit.

Below is a copy of a new printed Postage Label from 2013. Note the chevrons to the right side of the label, which is the main difference from the postage labels shown in the exhibit.

Below is a copy of a new Port Hood postmark that has been introduced since I revised my exhibit. I am not sure when it was introduced, but it is from 2015.

The tabulation provided at the top of the page includes a number of additional new types of the “Winged” Postmarks that have been introduced since the exhibit was compiled. 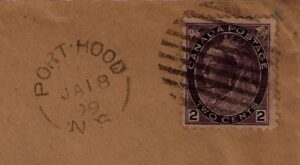